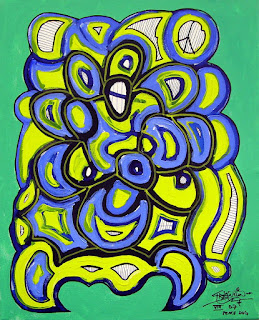 2007 | 40 x 50 cm
acrylics on canvas
Email ThisBlogThis!Share to TwitterShare to FacebookShare to Pinterest

England, 1986. On a trip through the south of England I took a walk in the harbor area of Plymouth where I saw this painting in a shop window or so I thought.


It turned out that it was not a shop after all but a former shop that had been turned into a artists studio. The artist working there was Robert Oscar Lenkiewicz who made it very clear that he was not a shopkeeper and hated being mistaken for one. After I apologised for intruding we had little chat nevertheless which left me deeply impressed by both the man and his work.


By accident, after more than 20 years, I found the painting on Google Images (I love the net) and I still recall the deep impression it had on me when I first saw it because it proved that 'traditional' painting is as important as it ever was. Before seeing this painting I had always thought that realistic painting was a thing of the past, boring and rendered useless by the invention of photography. 'The Glue Sniffer' changed that once and for all.

I had always hoped to return and meet him again one day but it was not to be. Robert Oscar Lenkiewicz died on the 6th of August, 2002.

The man is gone but, as they say, his legacy remains.
Email ThisBlogThis!Share to TwitterShare to FacebookShare to Pinterest