The Spirit Of Munich

Today's post has nothing to do with art or literature, today it is all about my hometown and its citizens.
Traditionally citizens of Munich are known for their grumpiness, we don't wish each other 'a nice day', we complain about the weather and almost everything else constantly and it takes some time to befriend a Muenchener. But when worse comes to worst you can count on the heart being in the right place. The city's unofficial motto is 'To live and let live' and when the situation demands it Munich will show its true colors. 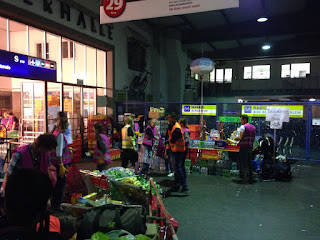 Over the last ten days Munich saw the arrival of over 40.000 refugees from various warzones. The why and how notwithstanding all of a sudden we were confronted with thousands of people arriving right in the city centre. Nobody seemed to have any sort of emergency plan and apart from a few local officials nobody seemed to care.

Calls for help were issued and Munich reponded massively. The citizens of Munich donated food, water, toys, clothes and other stuff at such volume that more than once the donations exceeded storage capacities. People signed up to do volunteer work on the spot just wanting to help. 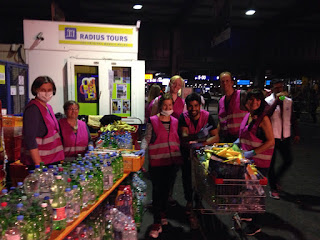 The pictures included in this post show private citizens distributing supplies they paid for with their own money during their spare time, all through the day and late at night. The quality sucks but the pictures were taken in a clandestine fashion in order not to embarrass anyone.


After donating water and cookies twice, my wife and I have decided to sign up for a volunteering shift at Munich Central Station Saturday evening. There is nothing that prepares you for the sheer dimensions of an operation of that size. 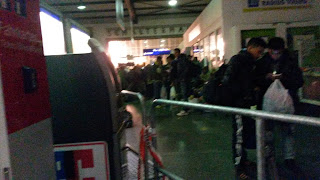 On Saturday 13.000 people were welcomed and processed, old people, families with little children, teenagers travelling alone, the lot. Most of them tired, weary and disoriented, with as many of their posessions as they could carry. Handing out water, bananas and candy bars isn't really a lot but at least it is something.


Taking personal initiative and helping each other out have a long tradition in Munich and the events of the last few days have made me deeply proud of both my city and the people who live in it.
Email ThisBlogThis!Share to TwitterShare to FacebookShare to Pinterest